This tutorial explains how to change the shape of embroidery objects in Hatch 2 and Hatch 3 embroidery software. It has been translated from the a french version made for Hatch 2 and needs some fixing.

Sometimes automatic digitizing produces too many detailed objects. To embroider side by side, with a weight 40 thread, two similar objects of 2-3mm width is not necessarily a good decision since there will be too many nodes next to each other. In order to fix this you can "union" these objects.

We will discuss a simple example of the "racing car" emoji (Noto font for Android 12). We first display the original in SVG, and the result of a semi-automatic digitization reduced to six colors (the original has 7)

The car's mirror contains two parts (red at the top and dark red at the bottom). The upper part is 3.16 x 1.82 millimeters and we can in our opinion unite it with the lower part. For this we use the operator "Weld" (fr. weld) 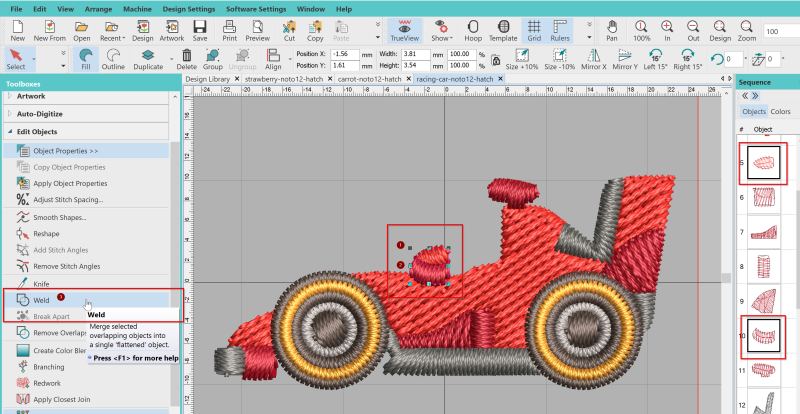 We propose the same operation for two other objects. For this type of embroidery, "less" is sometimes "more".

Sometimes, automatic digitizing creates small lines out of "nowhere". These optimize thread jumps and cutting, i.e. the machine will travel from one stitched object to next by following a line underneath an other objects. If you changed the order of stitched elements these may become unnecessary, so you could just kill these. If the line represents some unwanted small object in the original drawing you may also kill it.

The final result plus file links are shown further down.

Some embroidery objects are composed of some sort of sections and we did not find a way to do certain operations like reshaping as explained in the next chapter or adding direction lines.

An example, the Coral emoji, is discussed in CorelDRAW GEM for Hatch Embroidery.

Changing the shape of an embroidery object

Let us discuss some other modifications. In our opinion, the gray part under the car which touches the front wheel may not embroider well. So we propose to simplify the form. Also read the Reshape objects section of the official manual.

The Reshape button (either in the menu bar or in Toolboxes -> Edit Objects) puts us in the node editor which works according to similar principles as a vector drawing editor (InkScape, Illustrator, Drawing in Word or PPT, etc.) since an embroidery object is a vector object. However, Hatch has simplified the type of operations that can be done in drawing software. Basically, to work a shape you just have to move corner points and curve points, a relatively easy method to learn. There are no "bezier" controls. It is rather a positive decision to help novices but some graphic designers may not be pleased with it.

To modify the shape of an object, zoom on it as much as possible:

The editor also displays the following:

It is suggested to simplify the shape and keep only one vertical direction line but a little leaning back.

Here are the basic operations:

The last two operations don't always seem to work. In addition, deleting a node may result in deleting a wider range. We don't understand why. Probably these nodes in question have a secret, hidden role or there certain types of objects that are not editable without breaking them apart ...

The Add Stitch Angles operator is used to add direction lines. You have to click on both sides of the shape and then middle-click (or ENTER) to finish. Some operations are not permitted.

Here are the results of the changes. We also slightly pulled the red objects positioned higher. 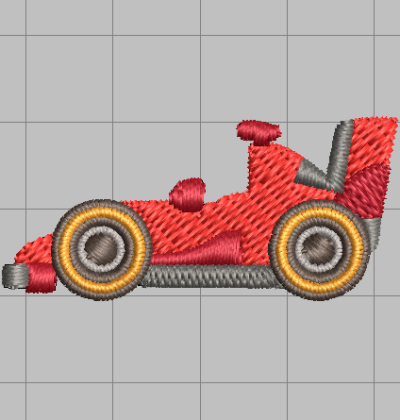 In Hatch 2, we found in an example discussed in "hourglass" example that Hatch can produce too many corner points (corner points) which is confusing stitch generation. We didn't really understand how to use the direction lines on the edges or Hatch is a bit limited at this level.

(to do) We need to check if this is still the case in Hatch 3.

In this case, you have to delete most of the corner points, then with the SPACE key transform 2-3 corner points into curve points. Otherwise, try smoothing.

Retrieved from "http://w.arbores.tech/w/index.php?title=Hatch_Embroidery_3_-_edit_embroidery_objects&oldid=20163"
Categories:
Cookies help us deliver our services. By using our services, you agree to our use of cookies.