There are many concepts related to computerized embroidery. In this entry we shall try to summarize the most important ones that are of interest to a absolute beginner. Basically, you would start from a vector drawing and the tell the machine to translate it to so-called embroidery objects (another kind of vector drawing) from which stitches then can be generated. Although advanced home user software is pretty smart in converting vector drawings to stitchable sections and the latter to stitch commands, you may have to intervene manually and/or at least set a few parameters in order to get a decent enough result. Read our pieces on Stitch Era (commercial) or InkStitch (open source) if you need to see some more practical examples that deal with beginner's embroidery projects and typical workflows that you could adopt.

A typical "workflow" for creating an embroidery includes the following steps.

A slightly more complex - but still not fully complete - workflow model is shown below. As you can see there are several design path that you could take. Good embroidery software should allow to draw and/or import drawings made with standard drawing software such as Illustrator or Inkscape. Then you have to be able to translate the drawing objects into embroidery objects and define their properties such as density, color, type of fill, etc. Through this information, embroidery stitches are generated, which can be edited to make micro-adjustments. All these drawings and other information are saved in a proprietary design file. The last step is to translate the embroidery objects into an executable file (point positions, thread changes, entry/exist instructions) by the embroidery machine. This type of file is not very editable, but easy to convert from one machine format to another. 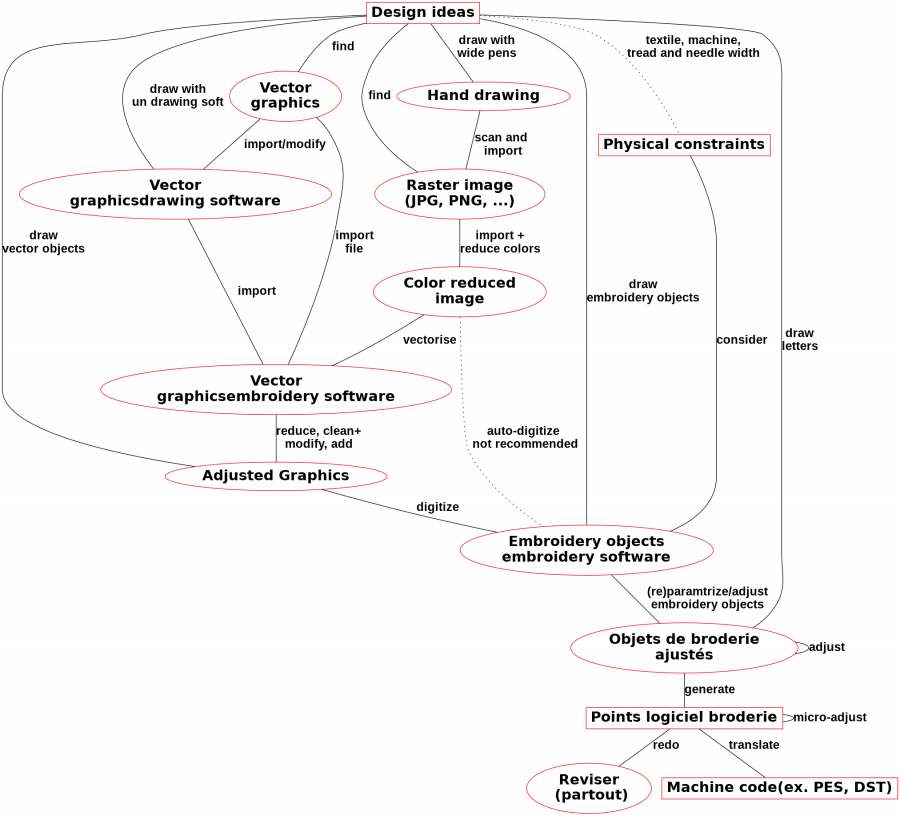 According to Kathy Jones, the "big three" (problems) of embroidery are puckering, poor fabric coverage or poor registration. “Correct stabilization, correct hooping and correct tension on your embroidery machine” will make your embroidery much more successful. However, there is more to know.

Most popular embroidery threads are made from Viscose (also known as rayon) or Polyester. Other materials include cotton, wood and metalized.

There exist several metrics for thickness and none is really intuitive to understand (like thickness of threads as for climbing ropes). According to Madeira (UK), thread thickness measures are standardized weights (standardized in the sense of statistics). For example:

We use Madeira Rayon 40, a so-called "classic" Viscose (artificial silk) thread type that is appropriate for beginners. It can be used both on fine fabrics like silk and rougher/thicker fabrics like jeans or leather.

Thread colors (not surprisingly) are not standardized. Each major thread company has its own with different gamuts, and different sales packs and additions and discontinuations etc. The biggest manufacturer is Madeira, others include Janome, Robison-Anton, Isacord, Mettler, and Gunold/Sulky. None of these will overlap their naming conventions. The only significant stabilizing force is Pantone™ which is a private company, well known and regarded throughout the garment and color industries. However, here, unlike with most of computerized embroidery questions about Color Distance (how similar will an average human eye see these particular colors) and the algorithms utilized in determining those are well established, and largely standardized with a rich firm scientific history. The best results being LAB-Delta E00, as well as progressively less powerful algorithms with notable speed advantages. The emphasis with thread colors is that they be consistent with themselves rather than consistent with threads offered by other companies or with the named gamuts released by Pantone (though many companies will release Pantone conversion charts which give the thread color to nearest Pantone color within some amount of error).

There are also a number of other considerable elements within the realm of thread, such as specialty threads like glow-in-the-dark, various metallics, color changing when exposed to sunlight, and considerations like the Matte finish on the thread. With companies like Madeira offering a popular "frosted matt" thread set which offer heavily reduced shine. Or companies noting which threads they have which are fire resistant.

There's also thread weight to consider which is namely how much does 1000 meters of the thread weigh or else how far 1kg of thread stretches, which taken as meaning how thin or thick is the thread. Standardly most thread used is 40wt, others are 60wt (thin), 100wt (very thin), 30wt (thick) and 12wt (very thick)

Also, from experience most thread company data to establish some RGB values for the color of the thread is bad. Well understood properties like different lighting and different white balances can often greatly bias a color. To get the RGB value to a very precise degree (which I've had to do) the best method is buy thread charts from the company (with actual fabric swatches of the thread) and put them into a flatbed scanner which has a known and well established white balance and take the average color over many pixels within the scanned swatch. Which will work for anything without strong fluorescent properties. Usually for a lot of projects good enough colors are sufficient and in those cases the color charts from various sources may be perfectly acceptable. However, even the numbers the companies use internally are known to be quite flawed. 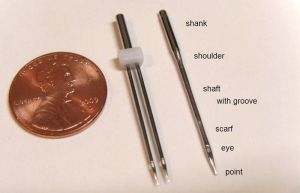 According to Wikipedia based on Lydia Morgan's "Machine-needle know-how", needles have the following structure (from top to tip)

In principle there exist only two kinds of system with respect to how it is attached to the machine, length etc.:

Needle size is in 1/100 mm sometimes assorted with a Singer size number.

Read more in the embroidery and sewing needle article.

Correct hooping together with appropriate backing and pull compensation are important factors for creating embroidery that will stay flat (more or less) look like on the computer screen. There are two major "test" that tell if hooping is well done:

Glide your finger on the hooped tissue. It should not create "waves"....

Tap on the hooped textile. If it sounds like a drum you are fine. This applies to non-elastic tissues and elastic tissues that you stabilized (as you should).

Read more in Hooping and stabilizing in computerized embroidery.

Backing also called stabilizer is either a woven cutaway or tearaway fabric or some type of solvable foil that are used underneath the fabric to provide some stability and support.

Underlay is a set of sparse stitches outlining the final design, that will be covered by dense stitches and thus invisible in the final embroidered work.

Underlay will stabilize a stretchable fabric for a section that you would like to stitch. Underlays also can be used to create a 3D effect or otherwise change the look of stitched layer on top. Finally, underlay is also used to even out a surface, e.g. tack down sticking out threads on towels or flatten out corduroy.

Here is a detailed introduction.

There are several kinds of patterns used, however one could distinguish the following three families of underlay:

In addition both soft and hard underlays then can use different patterns like:

Additional reading: Underlay, what lies beneath by Erich Campbell

Fabric has an impact on the result. In particular, certain types of fabric are more difficult since they are stretchable. Stretchable fabric could be stabilized in several ways that can be combined:

Other fabric such as bath towels and fleece present the problem that fine-grained stitching can "get visually lost".

Push and Pull refer to the idea that a fabric can be either pulled in or pushed out by the stitches. This typically happens when you fill larger surfaces. For example, a circle can become an oval. The first two following pictures show anti- and pro-nuclear logos between 5 and 7cm in diameter. The third picture shows distortion in the center-outside axis. The large yellow sold circle was replaced by light fill pattern using running stitches.

Both yellow circles were printed with a quite solid underlay that ran diagonally. Same for the red area and that was totally useless. The underlay probably had the effect to insure that the embroidery was flat, but it could not prevent the pull effect. We did not try using a backing. 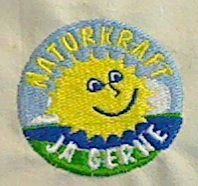 ... is crucial of course, since stitches may overlap a bit. I believe that one could adopt the following heuristics:

... of course some of these rules are contradictory. It's probably best to print a test object and see if it makes sense to change order. In addition one also can overstitch things like lines. A high-end embroidery machine allows to selectively print layers (threads).

Thread tension can be adjusted in any machine, tension is usually achieved by a kind of wheel pressing the thread.

Good tension can be seen as follows:

You also can try to de/increase the bobbin tension. Before doing so make sure that there is no dust under the tension adjusting spring (p. 286)

Special tips for the Brother PR1050X

Kathy Jones Tutorials has a series of interesting tutorials, e.g

Retrieved from "http://w.arbores.tech/w/index.php?title=Concepts_of_computerized_embroidery&oldid=20156"
Categories:
Cookies help us deliver our services. By using our services, you agree to our use of cookies.