This article or section is a stub. It does not yet contain enough information to be considered a real article. In other words, it is a short or insufficient piece of information and requires additions.

A concept map is a kind of visualization and a kind of diagram, i.e. a graphical representation of some domain knowledge. More precisely, concept mapping is a technique to visualize relationships between different concepts. Concepts are drawn as nodes (e.g. boxes) and relations are drawn with so-called arcs, i.e. lines that are drawn between associated concepts. These arcs are usually labeled (named), i.e. express the kind of relationship, for instance, "results in". In addition arcs can be directional, i.e. one would use arrows instead of lines.

Concept maps can be defined in a more narrow sense as by Novak & Cañas (2006) - see below - or more generally as a drawing that somehow connects concepts.

According to structural properties

The most typical concept is a map that contains

I.e. Novak and Cañas (2006), two of leading concept map researchers define concept maps in their famous Theory Underlying Concept Maps and How to Construct Them paper defined concept maps like this: “Concept maps are graphical tools for organizing and representing knowledge. They include concepts, usually enclosed in circles or boxes of some type, and relationships between concepts indicated by a connecting line linking two concepts. Words on the line, referred to as linking words or linking phrases, specify the relationship between the two concepts. We define concept as a perceived regularity in events or objects, or records of events or objects, designated by a label. The label for most concepts is a word, although sometimes we use symbols such as + or %, and sometimes more than one word is used. Propositions are statements about some object or event in the universe, either naturally occurring or constructed. Propositions contain two or more concepts connected using linking words or phrases to form a meaningful statement. Sometimes these are called semantic units, or units of meaning.”

Here is Novak's and Cañas' concept map explaining concept maps (this image may be under copyright): 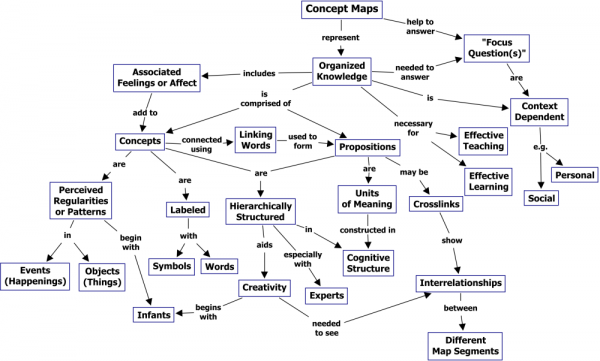 An other, simpler version of this map can be found in Wikipedia 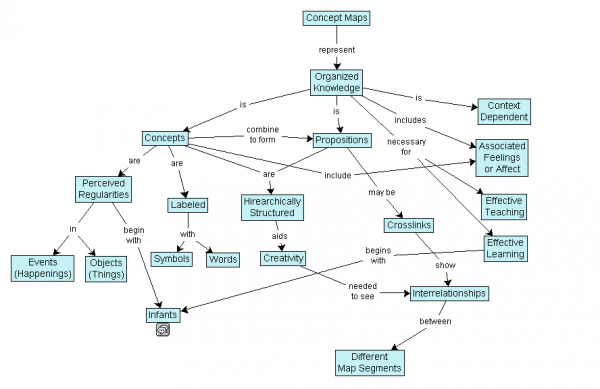 Tools like CMapTools can integrate multimedia resources. Alpert and Grueneberg argue as follows:

“Concept map tools should be able to represent multiple types or forms of knowledge, not merely text-based propositions. Specifically, incorporating multimedia in concept mapping software should (a) provide for greater cognitive fidelity in student-constructed concept maps, allowing students to more comprehensively represent their knowledge in ways similar to their own cognitive representations; (b) offer the illustrative advantages of dynamic visual imagery and audio to students learning new concepts and domains; (c) provide the capability of reifying concepts with concrete instances that can be seen and heard; (d) offer richer expressive power for concept map authors; (e) provide for a more engaging student experience; and (f) better capitalize on functionality available in modern personal computers.” (Alpert & Grueneberg, 2001)

There are two features of concept maps that are important in the facilitation of creative thinking: the hierarchical structure that is represented in a good map and the ability to search for and characterize new cross-links.

Rationales for concept mapping in education are based on several connected ideas:

(to integrate in some re-writing) “[...] the primary rationale for concept mapping is that students must establish connections between bits of given information, again in a visible medium. Concept mapping can stimulate students to demonstrate relationships among facts and concepts, demonstrate relationships between lower-order and higher-order concepts, and demonstrate relationships between old and new information within the students' own cognitive structures. It is noteworthy that writing of any kind, not just journaling or concept mapping, makes many of the same demands and that the literature on cohesion in writing (Halliday & Hasan, 1976; Lovejoy & Lance, 1991) complements the literature on concept mapping. Concept maps, then, not only serve the same ends as writing (making connections) but also serve as a valuable means to writing (as a prewriting or planning tool) and as a valuable means for the teacher to assess learning-in-progress.” (Germann & Young-soo, 2001:321).

However, findings reported from these authors who studied whether electronic journaling plus electronic concept mapping lead to heigtheing reflection in science classes for future science teachers, are not overwhelming: “It was hoped that use of electronic journaling and concept mapping would promote sustained reflection (as demonstrated in the quality of revised concept maps and quality of revised drafts of the culminating paper). On the surface we were disappointed. [...] This lack of demonstrated changed in their concept maps leads us to believe that most students were doing all they could to absorb new ideas and begin to make sense of them. If, however, reflection stems from certain habits of questioning and from heightened skepticism and discrimination of sources of evidence, then most students displayed many behavioral change”. (Germann & Young-soo, 2001: 327).

“According to Ausubel, learning is based upon the kinds of superordinate, representational, and combinatorial processes that occur during the reception of information. A primary process in learning is subsumption in which new material is related to relevant ideas in the existing cognitive structure on a substantive, non-verbatim basis” Subsumption Theory (D. Ausubel), retrieved 14:03, 18 August 2007 (MEST). According to this theory, cognitive maps can make excellent advance Organizers.

Concept maps can help with 1 for the presentation of information and 3 for both presentation and learning activities where the leaner draws concepts maps. These learner made maps then also can be used as evaluation tools and help to organize remediation activities.

Novak and Cañas (2006) also make the point that cognitive maps can favor integration of concepts and reduce misconceptions and cognitive load. Most importantly they help structuring of information which is crucial for retrieval. “We believe one of the reasons concept mapping is so powerful for the facilitation of meaningful learning is that it serves as a kind of template or scaffold to help to organize knowledge and to structure it, even though the structure must be built up piece by piece with small units of interacting concept and propositional frameworks. Many learners and teachers are surprised to see how this simple tool facilitates meaningful learning and the creation of powerful knowledge frameworks that not only permit utilization of the knowledge in new contexts, but also the retention of the knowledge for long periods of time (Novak, 1990; Novak & Wandersee, 1991).”

According to Novak and Cañas (2006) concept maps can be used to support many kinds of learning activities, from reading expert maps, to various active learning like data collection, report preparation, oral presentation, group collaboration, and finally, evaluation.

The authors then outline a few recommendations for student activities.

The free IHMC CmapTools support such activities. CmapTools provides a variety of features for a variety of the tasks that students perform (Cañas & Novak, 2005). For example

The concept map can thus become an artifact around which the various activities of the learning process can be centered.

“Ausubel suggests that advance organizers might foster meaningful learning by prompting the student regarding pre-existing superordinate concepts that are already in the student's cognitive structure, and by otherwise providing a context of general concepts into which the student can incorporate progressively differentiated details. Ausubel claims that by presenting a global representation of the knowledge to be learned, advance organizers might foster "integrative reconciliation" of the subdomains of knowledge - the ability to understand interconnections among the basic concepts in the domain.” (Ausubel's Advance Organizers, retrieved 19:35, 2 October 2006 (MEST))

Läge et al. (2008) suggest a strategy to support assimilative learning. Assimilative (as opposed to accomodation) is understood as integrating new information into existing knowledge or cognitive structures without restructuring the current schema. A stable and most notably a correct memory representation which "spans" the knowledge space is essential. Building elaborately a basic structure as well as the assimilative integration of new information can be eased with the aid of cognitive maps. The authors propose a “general model of a "cognitive map" which is based on geographical representations.In such a cognitive map, a distance measure between the concepts is used to represent the general similarity which an individual sees between each object of a knowledge field.” (Läge, 2008:30). Such maps can be generated with statistical techniques like multidimensional scaling from a matrix of paired similarity judgements for a set of objects.

These maps could be used in the following way. Students are given a map containing a number of concepts (e.g. 20) where the similarities (and therefore the distance) have been defined by experts. Learners then will have to state similarities between new concepts and existing ones. From this a learner's map will be generated. The learner's map then can be compared to the expert's map. “If the structure of a learner-map differs eminently from the expert-map, the person has to be instructed to re-learn the fundamental criteria of the knowledge field in a first step. As soon as the positions of the majority of objects correspond to those of the experts [...], the correctly placed objects can be used for an assimilative process for learning the incorrectly represented objects: Exercises are presented which specifically focus on a feature comparison by using one correctly placed (well known) object as an anchor for learning the features of the incorrectly represented object. Similarities and differences are specifically presented so that the person learns to better integrate the target object into the existing structure.” (Läge, 2008:32)

Particular kinds of visual maps and languages exist for many purposes. E.g.

The same institution, the Center for the Study of Evaluation at UCLA, also published a feasibility of machine scoring of concept maps study [1]

Some folks prefer using code to generate maps. It can be faster if precise layout is not an issue. See for example:

Online programs to sort out

(rather see bibliographies above ... )

Retrieved from "http://w.arbores.tech/w/index.php?title=Concept_map&oldid=17032"
Categories:
Cookies help us deliver our services. By using our services, you agree to our use of cookies.