This article or chapter is incomplete and its contents need further attention. Some information may be missing or may be wrong, spelling and grammar may have to be improved, use your judgment!

This is part of the methodology tutorial (see its table of contents).

Most important elements of an empirical theory-driven design: 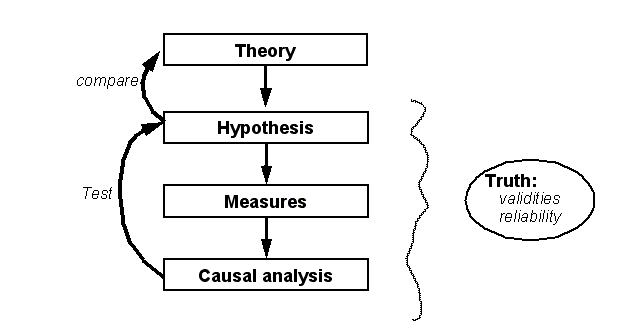 Experimental research is the ideal paradigm for empirical research in most natural science disciplines. It aims to control physical interactions between variables

We may draw a picture for this:

In other words, an experiment can "prove" (corroborate) that an intervention X will have an effect Y. X and Y are theorectical variables that are operationalized in the following way. X becomes intervention and Y quantified measures of the effect.

The simple experiment in human sciences

In humain sciences (as well as in the life sciences) it is not possible to totally isolate a subject from its environment. Therefore we have to make sure that effects of the environment are either controlled or at least equally distributed over the control group. Let's now look at a few strategies...

We compare effects of treatement (stimulus) vs. non-treatement of the two groups. The measure "O" is also called a post-test since we apply it after the treatment.

Analysis questions are formulated in this spirit: What is the probability that treatment X leads to effect O ? In the table above we can observe an experimentation effect. We can see that the effect in the experimental (treated) group is bigger than in the non experimental group and the other way round.

The Simple experiment with different treatments is a slightly different design alternative, but similar in spirit.

Example: First students are assigned randomly to different lab sessions using a different pedagogy (X) and we would like to know if there are different effects at the end (O).

This "post-test" only design is not really optimal and for various reasons.

In principle one could test such intervening variables with new experimental conditions, but for each new variable, one has to add at least 2 more experimental groups, something that is very costly. Let's now look at a more popular design...

The simple experiment with pretests

The following design attempts to control the difference that may exist between 2 experimental groups (i.e. we don't trust randomization or we can't randomly assign subjects to a group. This is typically the case when we select for example two classes in a school setting.

Here is the desing:

There are also disadvantage of this design, in particular the effect of the first measure on the experiment can influence the outcome. Example: (a) If X is supposed to increase a pedagogical effect, the O1 and O3 tests could have an effect (students learn by doing the test), so you can’t measure the "pure" effect of X.

This experimentation effect can be controlled by the Solomon design, which is similar in spirit, but this method requires two extra control groups and is more costly.

The Solomon design combines the simple experiment design with the pretest design:

Final Note: Simply comparing 2 different situations is NOT an experiment ! The treatment variable X must be simple and uni-dimensional (else you don’t know the precise cause of an effect). We shall come back to this problem below when we discuss quasi-experimental research designs.

There exist even more complicated designs to measure interaction effects of 2 or more treatments, but we shall stop here.

The non-experiment: what you should not do

Let's now look at bad designs, since they often can be found in the discourse of policy makers or early drafts of research proposals.

The (non)experiment without control group nor pretest

Example: A bad discourse on ICT competence of pupils: “Since we introduced ICT in the curriculum, most of the school’s pupils are good at finding things on the Internet"

There is a lack of real comparison !!

A statement like "Most of the students are good ! ..." means that you don't compare to what happens in other settings that do not include ICT in their curriculum. It's therefore pretty worthless as proof that introduction of ICT on schools had any effect.

"Things have changed ..." means that you are not aware of the situation before the change.

Experiments without randomization nor pretest

In the following design with have the Problem that there is no control over the conditions and the evolution of the control group.

Finally, let's look at the experiment without control group

The experiment without control group

We don’t know if X is the real cause

The thesis we are presenting was writting in French, but there he also did a Master thesis in cognitive psychology in English:

Notice. This thesis was funded by a real research project, i.e. the student did more than it usually expected for an MA thesis.

The big research question: Our research has the objective to show the influence of the continuity of a presentation flow, of collaboration and previous states in memory and to verify the influence of individual variables like visual span and capacities to do mental rotations.

The general objective is then further developed through 1 1/2 pages in the thesis. Causalities are discussed in verbal form (p. 34-40) and then "general" hypothesis are presented on 2 pages.

Population: 160 students. All have been tested to check if the were novices (show lack of domain knowledge used in the material)

Nevertheless, quasi-experimental research can help to test all sorts of threats from variables that you can not control. These are called threats to internal validity (see below)

Usage examples in the social sciences

There exist various designs. Some are easier to conduct, but they lead to less solid (valid) results. Let's examine a few...

Here is a schema of the interrupted time series design that attempts to control the effect of possible other events (treatements) on a single experimental group.

You can control (natural) trends somewhat. I.e. when you observe or introduce a treatment, e.g. a pedagogical reform, you may not really be sure that reform features themselves had any effect or if it was something else, like a general trend in the abilities of the student population.

You can't control external simultaneous events ( X2 that happen at the same time as X1 ) Example concerning the effect of ICT-based pedagogies in the classroom: These ICT-based pedagogies may have been introduced together with other pedagogical innovations. So which one does have an effect on overall performance ?

Now let's have an informal look at time serious, i.e. measures that evolve over time and that can corroborate or invalidate hypothesis about an intervention X. 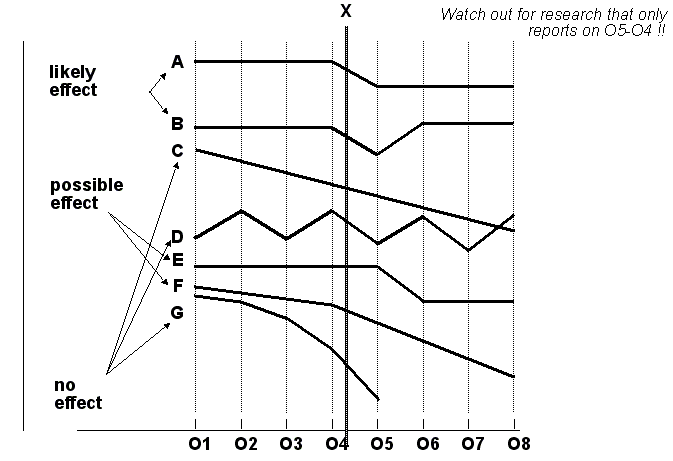 A. a statistical effect is likely
Example "Student’s drop-out rates are lower since we added forums to the e-learning content server"
but attention: you don’t know if there was an other intervention at the same time.

B. Likely Straw fire effect
Teaching has improved after we introduced X. But then, things went back to normal
So there is an effect, but after a while the cause "wears out". E.g. the typical motivation boost from ICT introduction in the curriculum may not last

C. Natural trend (unlikely effect)
You can control this error by looking beyond O4 and O5 !

D. Confusion between cycle effects and intervention
Example: government introduced measures to fight unemployment, but you don’t know if they only "surf" on a natural business cycle. Control this by looking at the whole time series.

F. Trend acceleration effect,
difficult to discriminate from G. I.e. there is some change in the curve, but it may just be variant of exponential natural evolution.

The big question you should ask yourself over and over: What other variables could influence our experiments ? Campbell and Stanley (1963) created an initial typology of threats for which you have to watch out:

Let's now have a look at some designs that attempt to control such threats.

This design adopts comparisons between two similar (but not equivalent) control groups.

Advantages: Good at detecting other causes

Here is an example of an imitation effect. In course we introduce

Review Question: Why does student satisfaction improve at the same time for B ?

One of the most powerful quasi-experimental research designs uses comparative time series. I.e. you combine the Interrupted_time_series_design with the Non-equivalent_control_group_design we presented above.

There exist four kinds of validity according to Stanley et al.:

External validity .... can you make generalizations ?

Construction validity ... are your operationalizations sound ?

Important: This typology is also useful for other settings, e.g. structured qualitative analysis or statistical designs. In most other empricial research designs you must address these issues.

A sample "experiment" from Notari’s thesis: 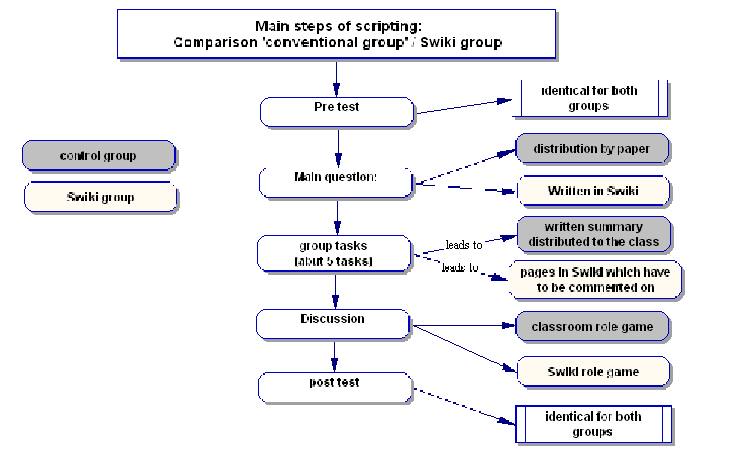 Let's now look into so-called statistical designs, an approach that is typically used in "survey research".

Designs are based on prior theoretical reasoning, because

The Most popular variant in educational technology is so-called "survey research".

Levels of reasoning within a statistical approach

(Just for your information. If it looks too complicated, ignore)

Error of type 1: you believe that a statistical relation is meaningful ... but "in reality" it doesn’t exist.

Error of type 2: you believe that a relation does not exist ... but "in reality" it does.

There exist useful statistical methods to diminish the risks 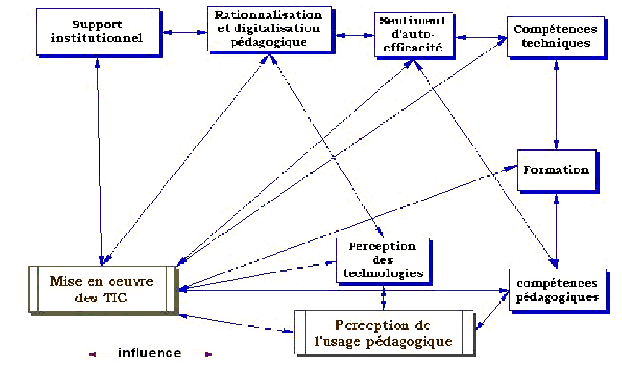 Below we quote from the thesis (and not the research plan):

Definition of each "conceptual domain" (see above, i.e. main factors/variables identified from the literature).

Item sets (questions) and scales have been adapted from the literature if possible, e.g.

Purification of the instrument

Example - "perception of pedagogical ICT use"

Here we show one of these 2 question sets:

Note: these 10 items and the 12 items from question 43 have been later reduced to 3 indicators:

We shall use this example again in the Methodology tutorial - quantitative data analysis.

This design is popular in comparative public policy analysis. It can be used to compare educational systems of a few districts, states or countries.

Make sure to have good variance within “operative variables” (dependant + independent)

Make sure that no other variable shows variance (i.e. that there are no hidden control variables that may produce effects)

In more simple words: Select cases that are different in respect to the variables that are of interest to your research, but otherwise similar in all other respects.

Advantages and inconvenients of this method:

Weak or none statistical testing. Most often researchers just compare data but can not provide statistically significant results, since cases are too few.

In this tutorials we present some important theory-driven research designs which we summarize in the table below with a few typical use cases. There exist other theory-driven designs, e.g. simulations.

Of course, you can combine these approaches within a research project. You also may use different designs to look a the same question in order triangulate answers.

Retrieved from "http://w.arbores.tech/w/index.php?title=Methodology_tutorial_-_theory-driven_research_designs&oldid=16234"
Categories:
Cookies help us deliver our services. By using our services, you agree to our use of cookies.