This article or chapter is incomplete and its contents need further attention. Some information may be missing or may be wrong, spelling and grammar may have to be improved, use your judgment!

By Alain Senteni, University of Mauritius and Daniel K. Schneider.

Béguin and Rabardel (2000) define a mediating instrument by its two components: (1) an artifact component which may be material or symbolic, produced by the subject or by others; and (2) one or more associated schemes, resulting from a construction specific to the subject, or through the appropriation of pre-existing social schemes.

“The process of transforming an artifact into an instrument of human activity is a developmental process of its own (see Virkkunen and Ahonen 2007). Pierre Rabardel and his colleagues have examined the dynamics of such processes of “instrument genesis” (Vérillon and Rabardel 1995; Béguin and Rabardel 2000). The first stage of the process involves shaping, adapting, and tailoring the artifact according to the local needs and requirements of activity. A teacher who selects a technology-enhanced learning environment and designs, jointly with students (and researchers), knowledge-building projects to be pursued, has a critical role in this instrumentation process. The second stage focuses on developing and cultivating personal and collective practices needed for productively using the artifact as an instrument in knowledge-building activity. The gradual instrumentalization process takes time and depends on the involved agents’ own intensive participation in the collective inquiry process. It involves a developmental process in which the instrument gradually merges or fuses in the participants’ transforming activity system (Engeström 1987).” (Hakarainen, 2009).

The instrument as mediator 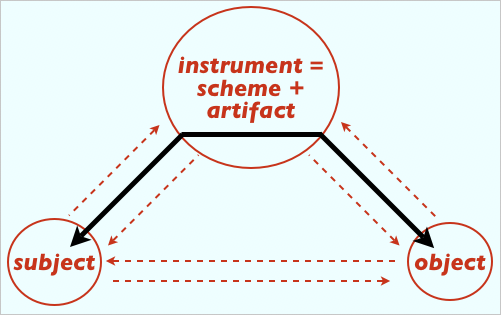 The instrument in transformative pedagogy

Deemed to operate mainlly in pre-computerised contexts, or in contexts where computerization is shyly emerging, transformative pedagogy (TP) is interested in the construction of new social schemes or in the appropriation of pre-existing social schemes. In developing countries whose context brings it back to its historical roots, TP should provide support and careful mentoring for ICT integration and effective use, failing which technological progress and infrastructure development cannot really be (cost)-effective, creating isolated micro-cyberislands with little impact on the overall development of the countries. TP's focus is then kept on facilitation and development of social schemes rather than on the production-alteration-improvement of new artifacts. In a first phase, the schemes addressed by TP regard essentially the appropriation, integration, effective use and cultural (rather than technical) contextualisation of artifacts, a good part of them being often developed elsewhere, particularly for the digital ones. If TP encourages knowledge creation, it must before all develop and support its presupposed social practices from the primary school level to tertiary education, in order to help the learners to create a synergy amongst their individual cognitive resources for the production of shared knowledge objects.

In the perspective of transformative pedagogy, i.e. a evolutionary and systemic perspective on education and culture in which pragmatic concepts are elaborated through an historical and social construction within communities and work collectivities (Rabardel & Béguin, 00), technology is merely seen as the mediating instrument of human learning activity.

As argued by researchers from the Computer-Supported Collaborative Learning (CSCL) community (Koschmann, 2002)(Stahl, 2002ab), a better understanding of the functioning of artifacts, digital or conceptual, helps understand how to effectively foster and convey collaborative meaning-making. A look at the history of transformative pedagogy (e.g. the European New Education movement) shows that these artifacts evolve more rapidly than the pedagogical goals and objectives they are created to mediate.

Retrieved from "http://w.arbores.tech/w/index.php?title=Instrumentation&oldid=16208"
Categories:
Cookies help us deliver our services. By using our services, you agree to our use of cookies.